Before moving to Tembagapura, Chris worked in Freeport’s corporate office as part of the global health & safety team. His responsibilities included quarterly visits to PT Freeport Indonesia (PTFI, Freeport’s affiliate in Indonesia). Each visit would end with a new collection of pictures and stories, which he would eagerly share with us upon his return home. We saw many remarkable photos, never imagining that, one day, we would see those fantastical places for ourselves.

One of PTFI’s biggest and brightest gems is the Grasberg open pit mine. It’s regarded as the world’s largest gold mine and third largest copper mine. Sitting in a valley below two of planet earth’s few equatorial glaciers, and 4,300 meters above sea level, it’s a mining marvel in the clouds!

Leaving Tembagapura without a tour of Grasberg would have been an injustice on many different levels. So, at the eleventh-hour, Chris arranged a tour of the mine for the girls and me. Heavily clad in steel-toed boots, safety vests, hard hats, and safety glasses, we traveled by truck and tram to see it with our own eyes. 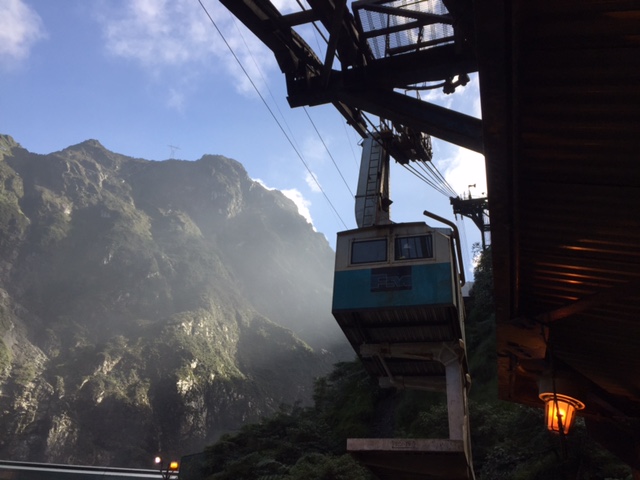 There are two means of transportation up to the mine: the HEAT Road and the tram. We chose to take the tram. 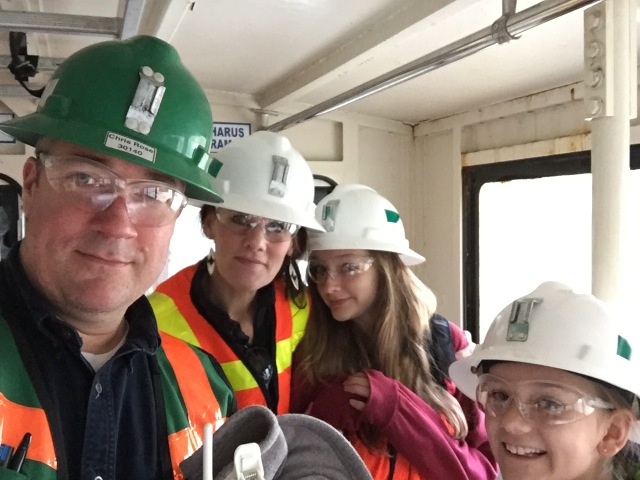 The four of us rockin’ it on the tram in our PPE (personal protective equipment).

This picture was taken during our ascent up the mountain. The process below is the Concentrator, which pulverizes the ore from the mines into mud, and separates the copper, gold, and silver-bearing minerals from the rest of the rock. 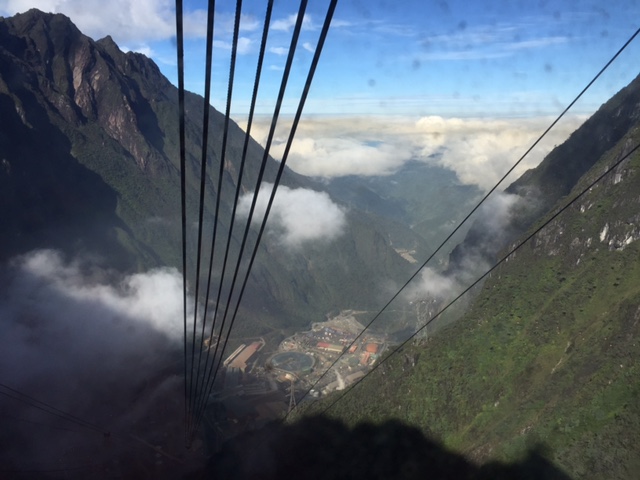 Climbing above the clouds, the Concentrator quickly disappeared in the distance. 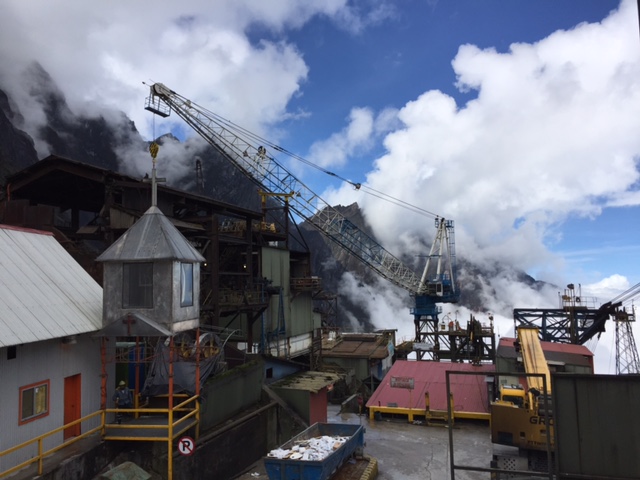 At the top of the tram there are many buildings, machines, and vehicles that you would expect to see in a mine. There’s also something that you would never expect to see. Can you spot it? The tin-colored metal building on the left is a church (note the crucifix on the front and the roof). There are numerous churches and mosques for worshippers peppered all around jobsite – including townsite, the open pit mine, and even a few located several miles below the surface in PTFI’s extensive underground mines. 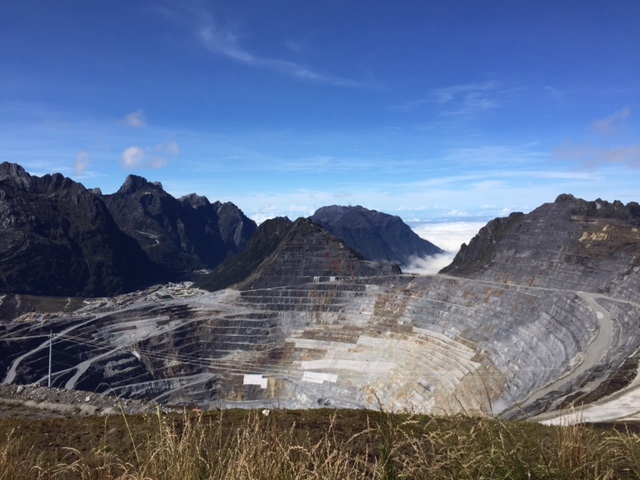 A view of Grasberg “Grass Mountain” from the rim. In 1936, Dutch mountaineers discovered an impressive copper deposit as they tried to reach the nearby Carstenz Pyramid, one of the world’s “Seven Summits”. The discovery led to Freeport’s first Indonesian mine, Ertsberg, “Ore Mountain.” The upper rim is visible in the valley to the left behind Grasberg. 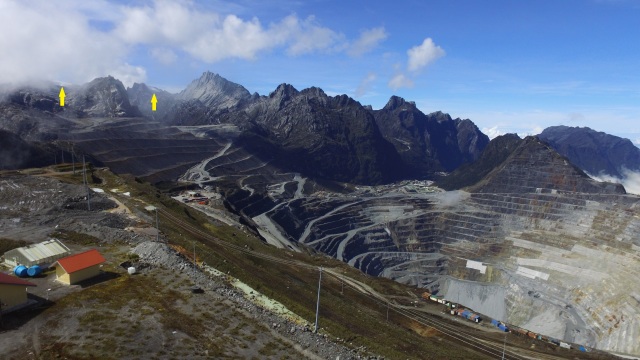 The yellow arrows to the left of the mine point to some of the last equatorial glaciers in the world. 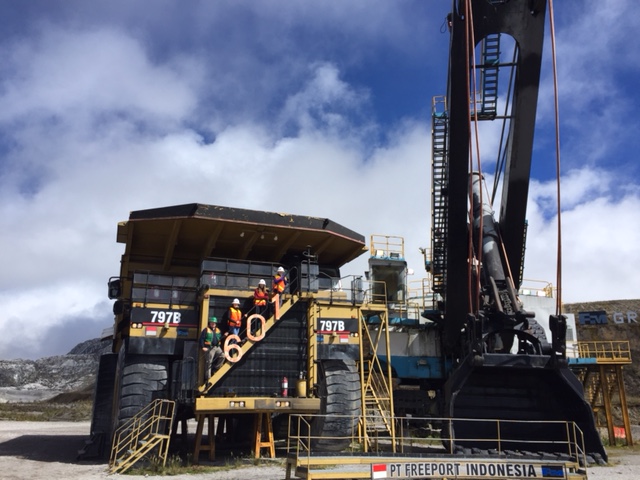 Chris, the girls, and me standing on the stairs of a 797; Caterpillar’s largest, highest capacity haul truck. The value of a haul truck this size is approximately US$5,000,000.

Chris, the girls, and me standing in the dipper bucket of a massive shovel (the same shovel pictured above). 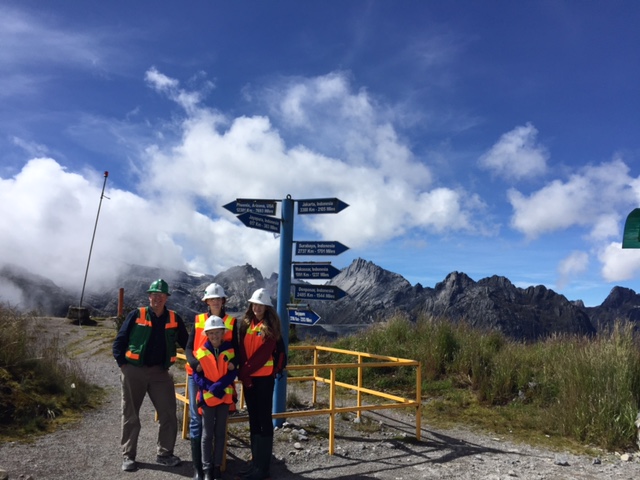 During one of Chris’s visits, he and several of his coworkers had their picture taken at this very spot. The sign on the top left became the inspiration for the title of this blog. 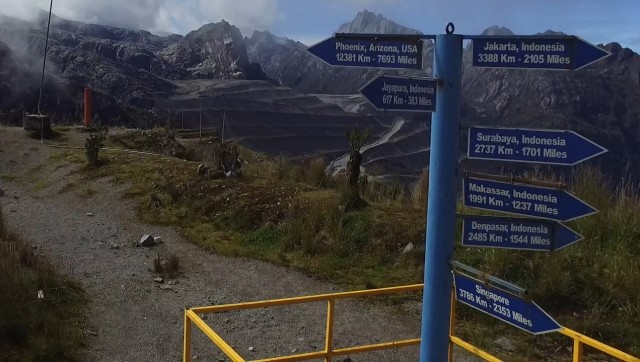 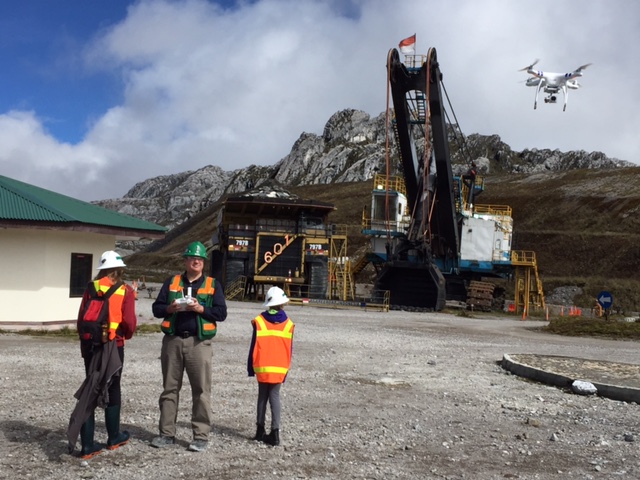 Chris beginning his drone flight over the pit. Even thought the drone can fly up and out as far as 1 kilometer, it didn’t even make it 1/3 of the way out. That tells you just how large the pit is! 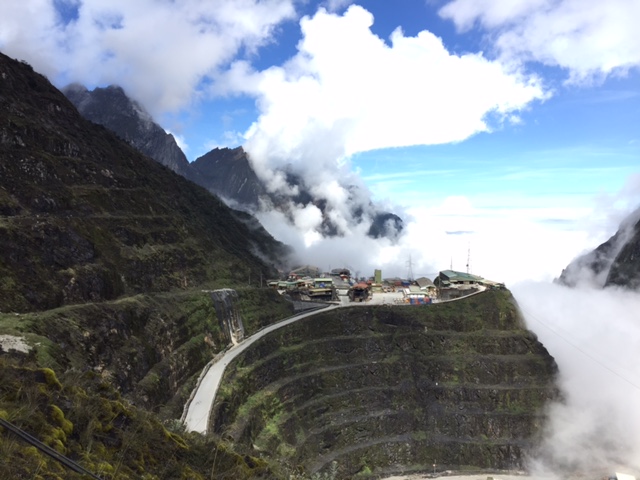 A stunning view of a road through the original Ertsberg open pit mine, between Grasberg and the surface subsidence zone from some of the underground mines.  The top of the tram is located in the buildings in the center of the photo. 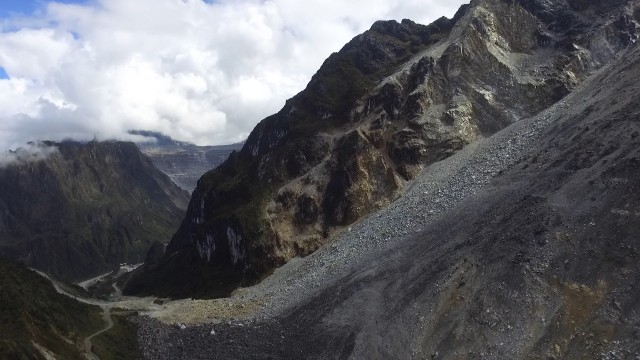 The subsidence zone from the layered block cave mines in the Ertsberg East Skarn System (EESS) orebody, mined since the early 1980s.  PTFI’s newest underground mine, DMLZ, is about to begin operations almost 2 kilometers below this point. 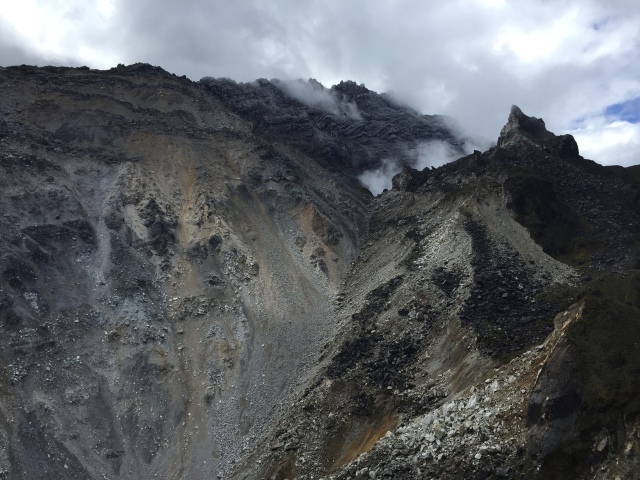 Another view of the EESS subsidence zone. The spire on the right was the end of the original ridgeline. 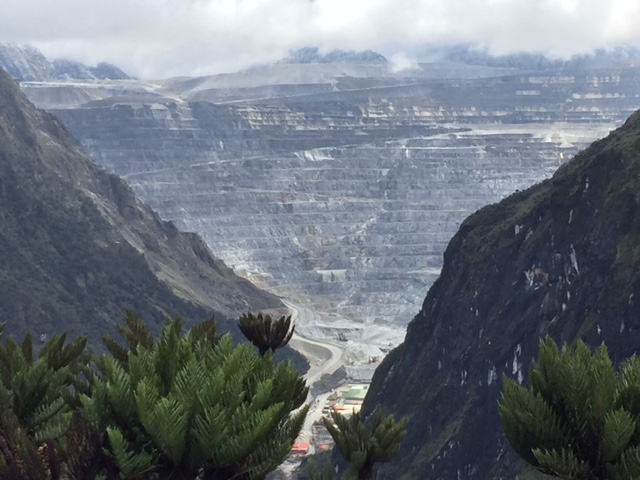 A view of the pit from the subsidence zone overlook. 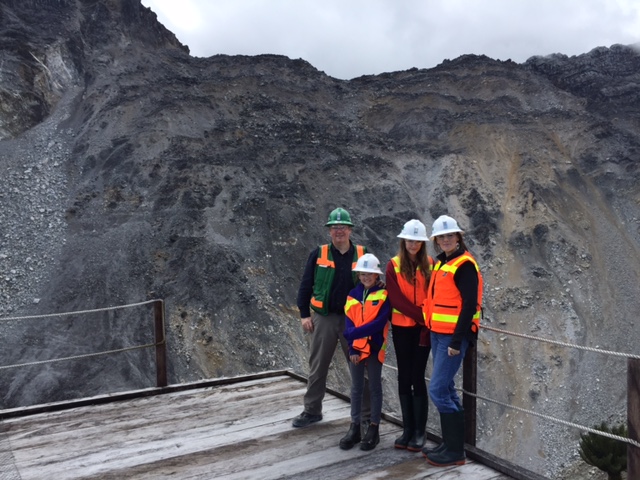 Standing on the deck near the EESS subsidence zone. We didn’t see any rock fall while we were standing there, but we were lucky enough to hear rock rolling down the slope while walking back to the truck.  Triggered by active mining in the DOZ mine 1500 meters/1 mile below ground, it lasted for 30-45 seconds.  It was one of the coolest things that we have ever heard! 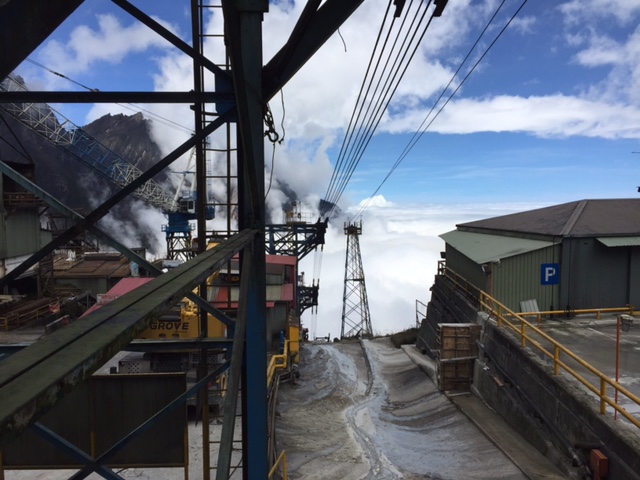 Waiting for the tram to pick us up. The clouds were moving in very quickly by this point. 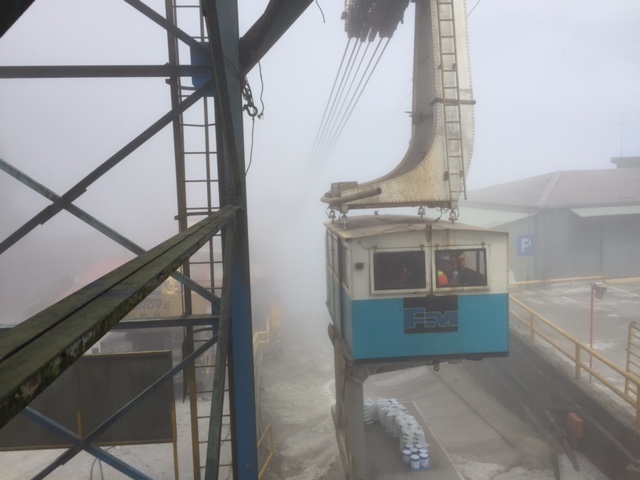 Within five minutes, the tram was up and we were completely surrounded by cloud. 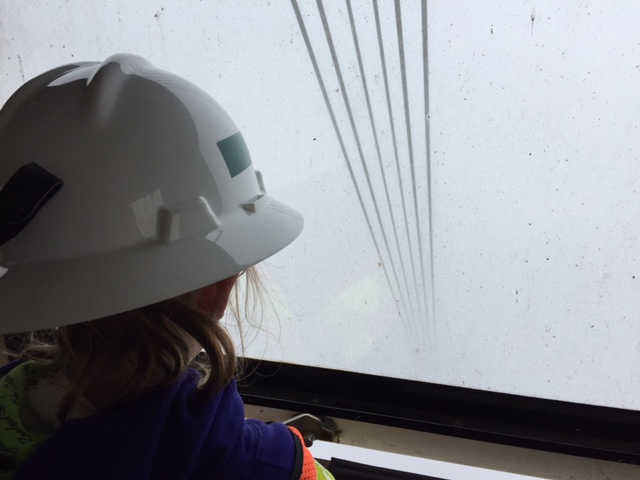 Kylee looking into a wall of clouds with the tram’s wires disappearing into nothingness. 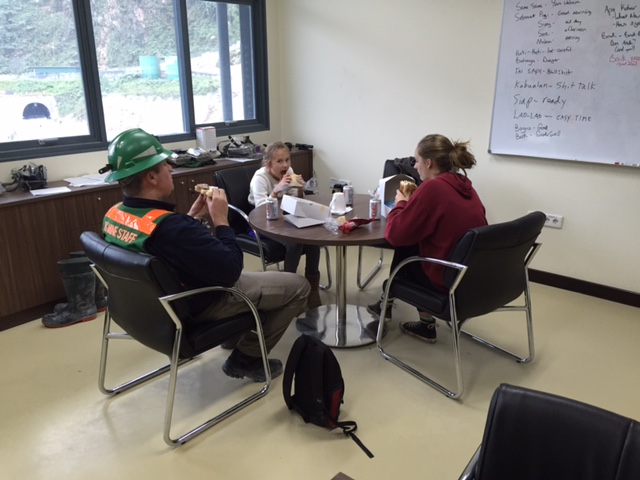 After a memorable morning of experiencing Grasberg, we were famished! We returned to Chris’s office where he was able to dig up a few Diet Cokes and a couple of makan boxes.