Thousands of miles from France, a French territory rests on an archipelago in the sun-drenched South Pacific seas. New Caledonia, more commonly known to the locals as Nouvelle-Calédonie, is best described as a Melanesian island with a touch of Parisian sophistication. It’s an unusual fusion of culture that is unique to that set of islands. We spent six days in the capital city of Noumea, a quiet town that sits on a large peninsula with the world’s largest lagoon, picturesque bays, and sandy beaches. 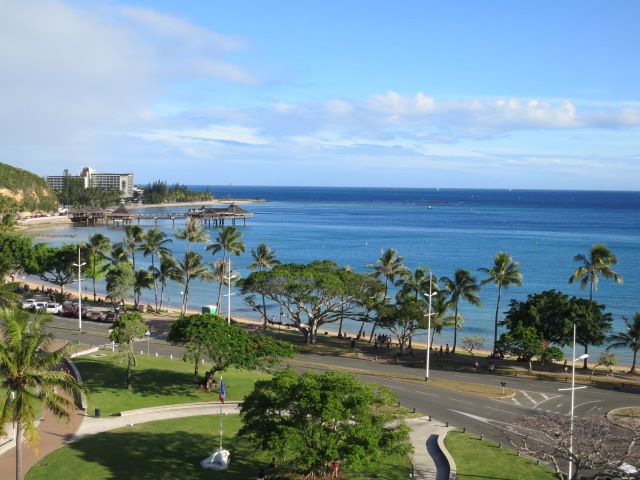 An ocean view of a coastline in Noumea. 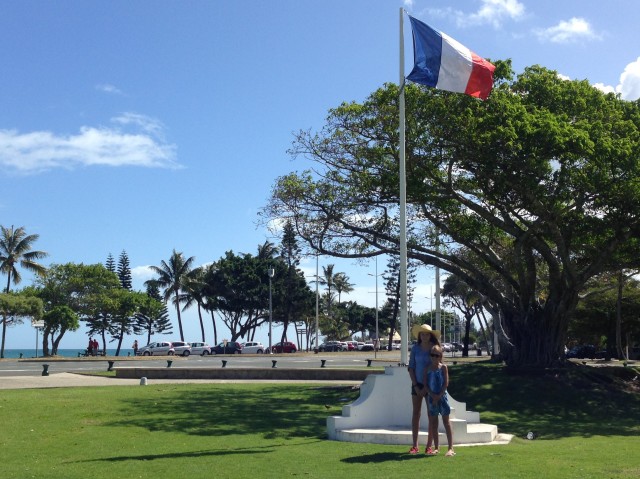 The girls standing in front of the French flag. 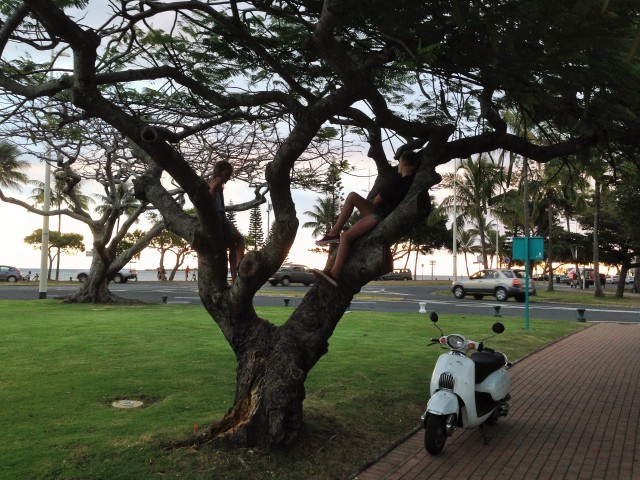 Where there’s a tree, there’s two girls. There are no climbing trees at jobsite, so the girls are always on the lookout for a tree to climb when we are off site. 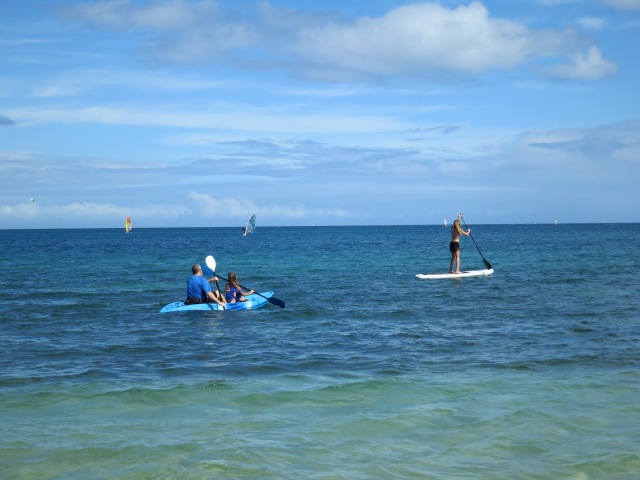 Chris and Kylee riding in a sea kayak, and Ally paddle-boarding in Noumea. 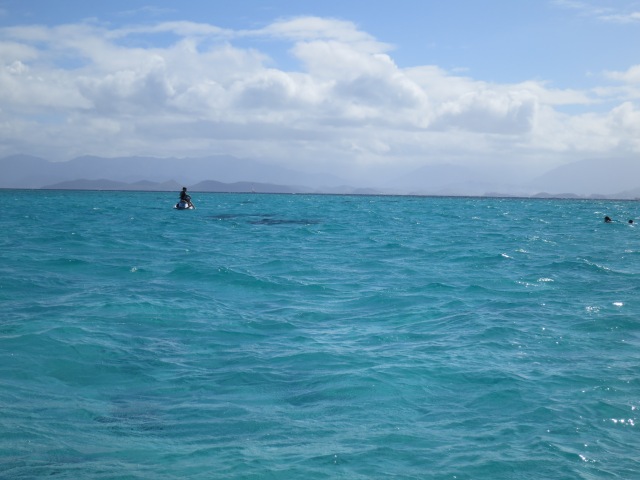 While in Noumea, we took a half-day jet skiing tour to two outlying islands. On the way to the first island, we stopped to take a short break and to let the girls swim in the vibrant turquoise waters. 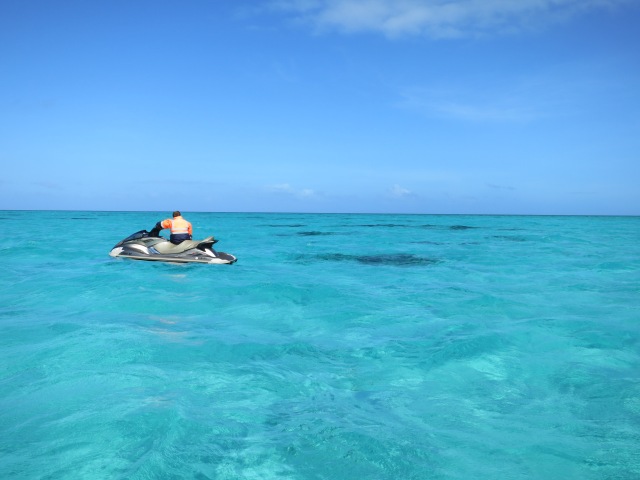 The colors of the sky and ocean in this picture are more true to what we saw and experienced. Our camera rarely captures what our eyes see. Either way, the views are nothing short of stunning! The man on the jet ski was our tour guide. 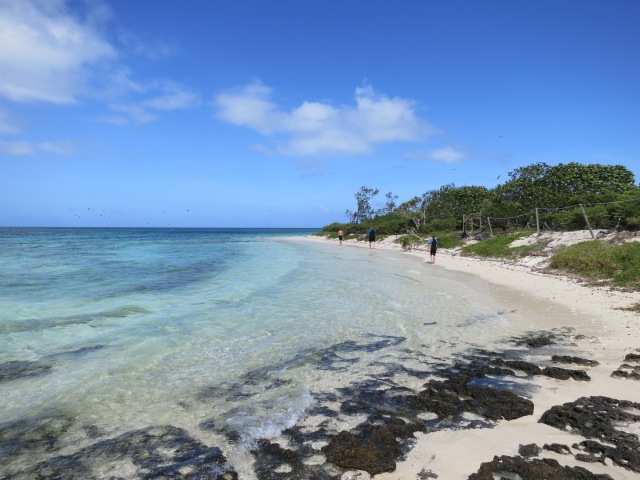 We took an hour break on this small, uninhabited island, which gave us plenty of time to walk around it, swim, snorkel, and enjoy the scenery. 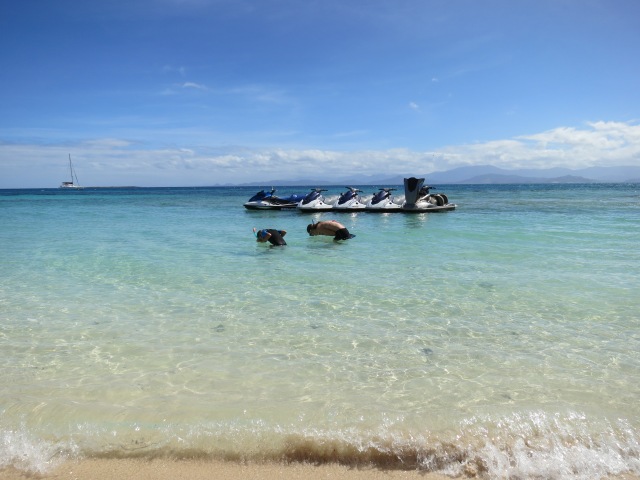 Other than the outstanding food (the Noumeans are culinary artists), our most defining time in New Caledonia was a day trip to Île des Pins (Isle of Pines); a small island 110km southeast of Noumea. Imagine a fragmented piece of Alaska in the warm, tropical waters of the Coral Sea. If that doesn’t sound magnificent enough, imagine white sandy beaches and natural pools of seawater where the spectacular display of the Northern Lights radiate from beneath the water’s surface. Its raw beauty was breathtaking! 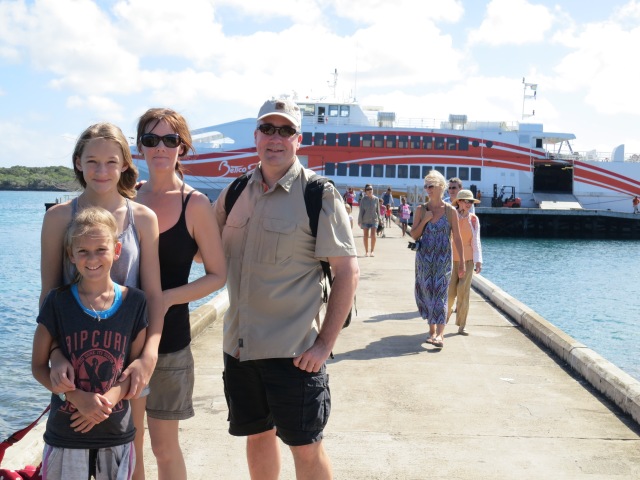 We took a two-and-a-half hour ferry ride from Noumea to the island. Our tour guide, Jeankri, took this photo of us right after we arrived on the island. Jeankri’s calm, relaxed demeanor exemplified the locals’ perspective of life on the island – “A quoi bon le compter, il ne s’arrêtera jamais.” Which means, “Why measure the time, it will never end.” 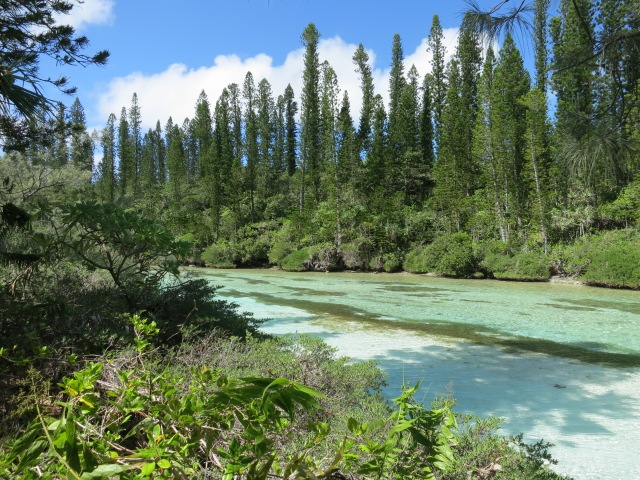 Our first stop was to Baie de Oro; revered as one of New Caledonia’s most treasured destinations. With Araucarua pines soaring above pristine sandy beaches, it is one of the most beautiful places in the south-pacific. FYI – Araucarus pines are the living Christmas trees that you can buy at Home Depot or Walmart during the holidays. Here, in their native environment, they grow to be massive and beautiful. 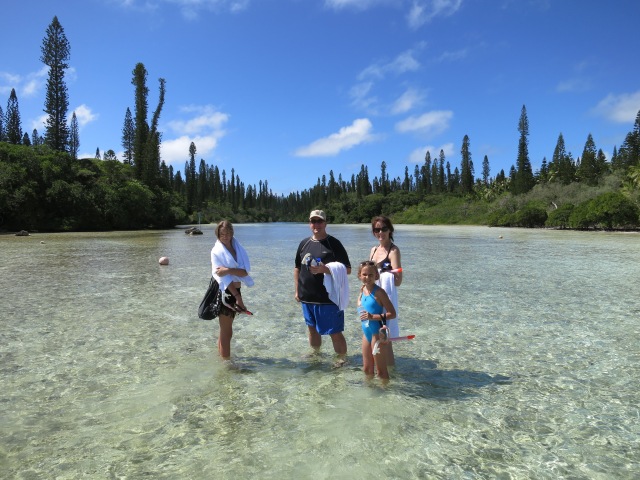 Jeankri took another photo of us walking through the sea-water river pictured above. 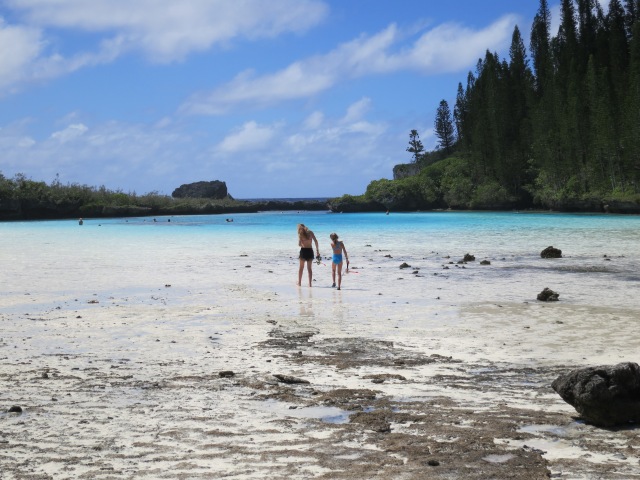 After a short walk up the river and through a forest trail, we reached earth’s sweet spot – Baie de Oro’s la Pascine Naturelle. The large body of crystal clear water, embedded in coral, is the islands best spot for snorkeling. It is filled with an extensive variety of colorful fish, coral, and other sea creatures. 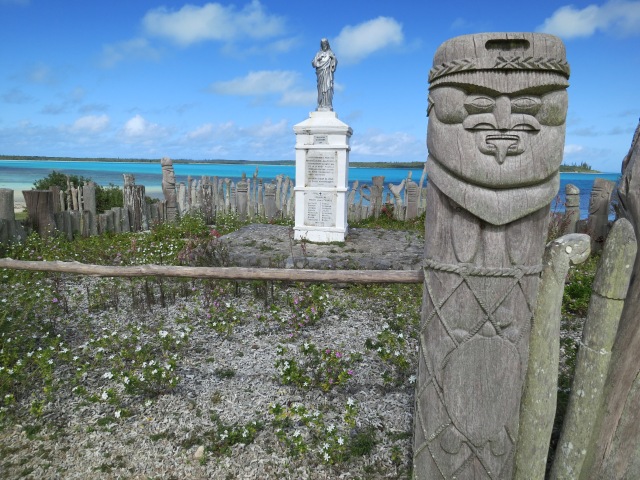 After leaving Baie de Oro, we went to La statue de St. Maurice. The statue of St Maurice (in the background), commemorates the arrival of the first Christian missionaries to the island. The statue is surrounded by hand carved totems made by the numerous clans of the island. 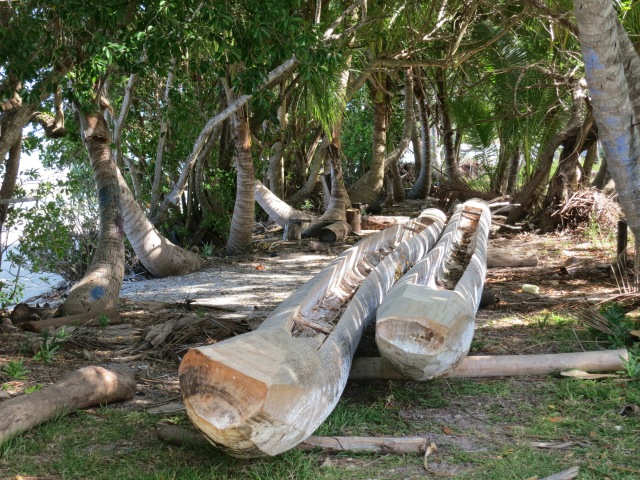 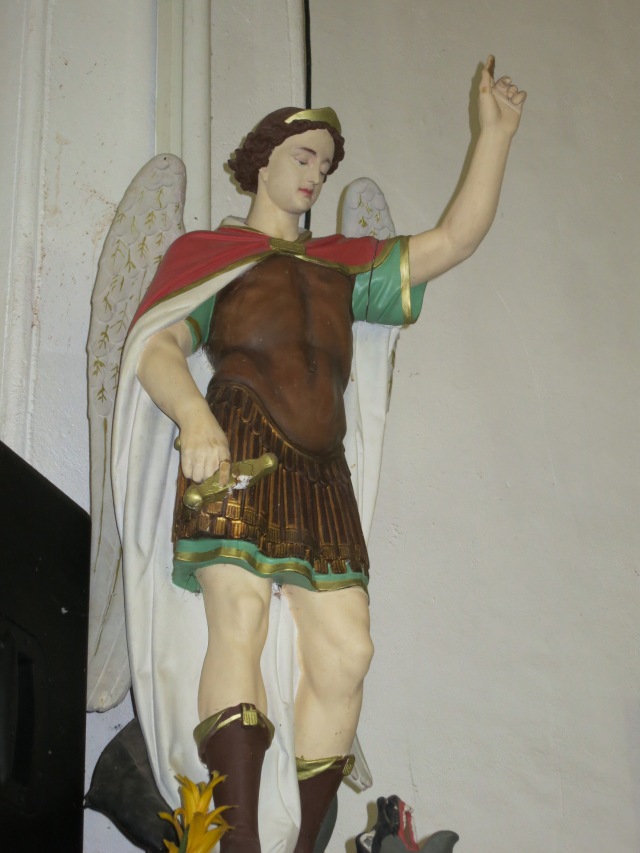 Kylee has a funny habit of holding her index finger up and saying, “Jus’ sec”, if she needs to pause. We found her patron saint in the Notre-Dame de l’Assomption church. The church was built in 1860 by French prisoners, and is still used today. 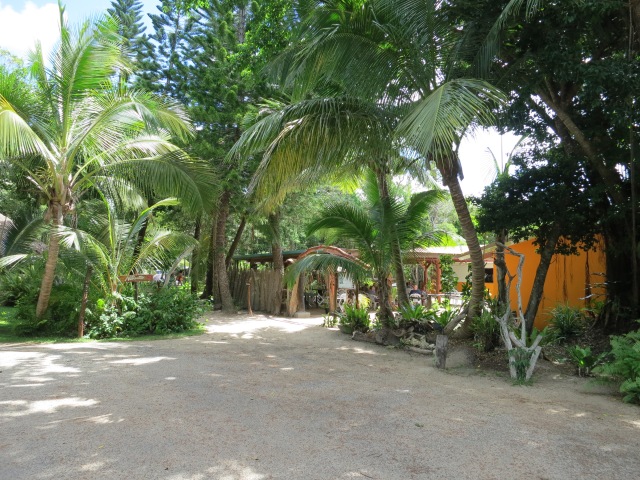 Jeankri recommended Kunie Kaa, at Nataiwatch, for lunch. It’s outdoor, sand in your feet setting is known for serving “plats du jours,” which means dish of the day. 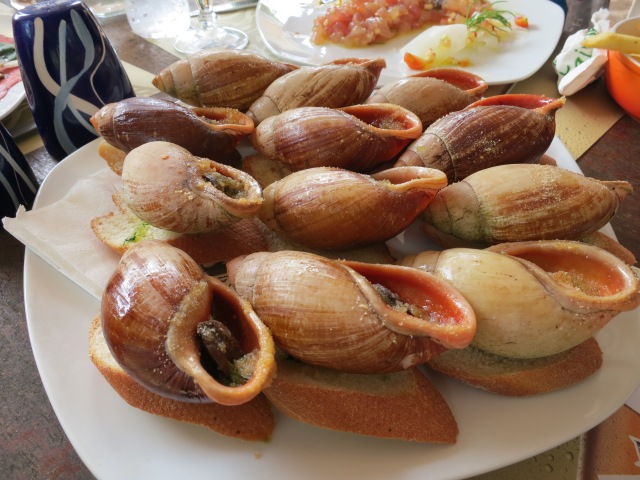 Every day, the chef gets up early to catch and procure fresh ingredients for the day’s menu.  With the ingredients in hand, he returns to the kitchen to prepare breakfast, lunch, and dinner. The only standard (and best) part of the menu is escargot, which is made from a special variety of snail that only lives wild on that island. These snails, living or cooked, can’t be transported off the island. High penalties are given to those who try to take the snails (or the empty shells) with them. 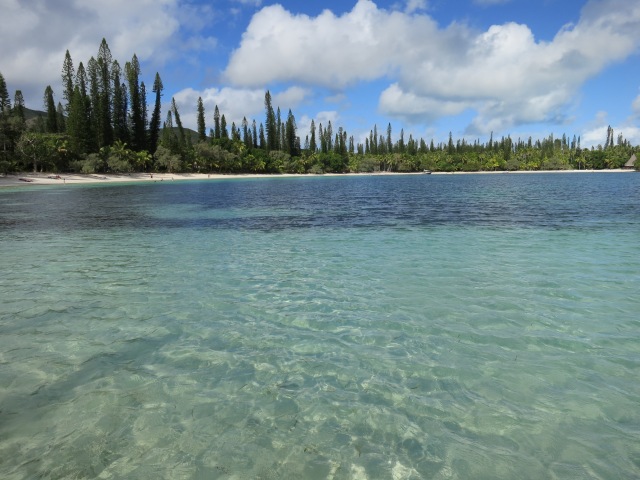 Our last stop, before departing Ile de Pins, was to Baie de Kanumera for more swimming and snorkeling. 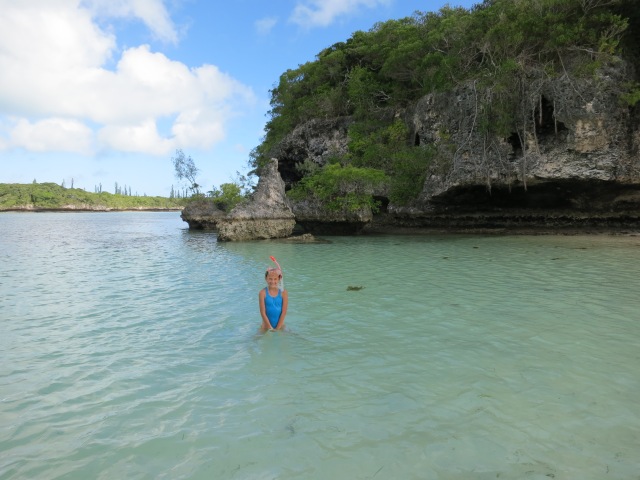 Kylee, our snorkeling aficionado, has come a long way from her first snorkeling adventure in Hawaii. She wouldn’t even get off the boat because she was afraid of running in to the people who stole Nemo.

After leaving New Caledonia, we flew to Brisbane to visit Australia’s Gold Coast and Sunshine Coast. We spent four days in Byron Bay and five days in Noosa Heads. It was all about shopping, surfing, walking along beaches, hiking through national forests, exploring farmers’ markets, eating good food, and getting two black eyes*. The simple things. 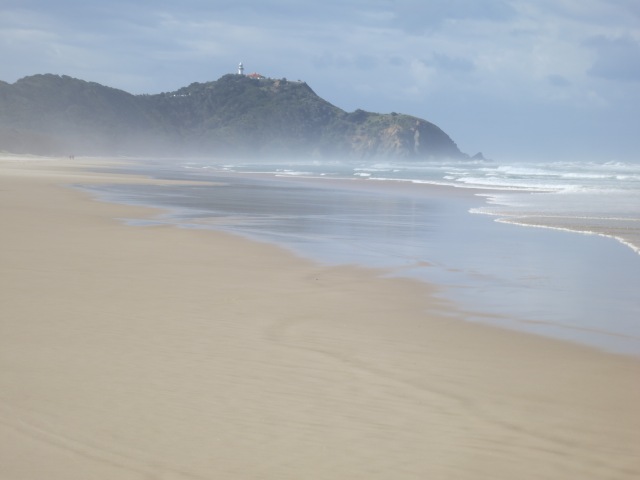 The best thing about the sand in Byron Bay, other than its soft, powdery texture, is that it squeaks. 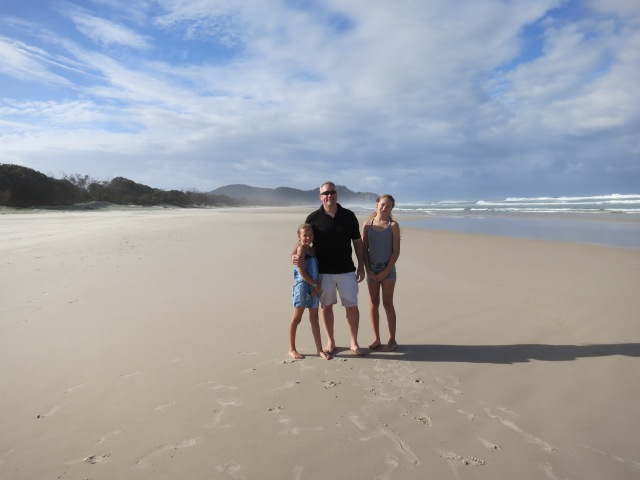 Chris and the girls taking a break from the squeaky sand. 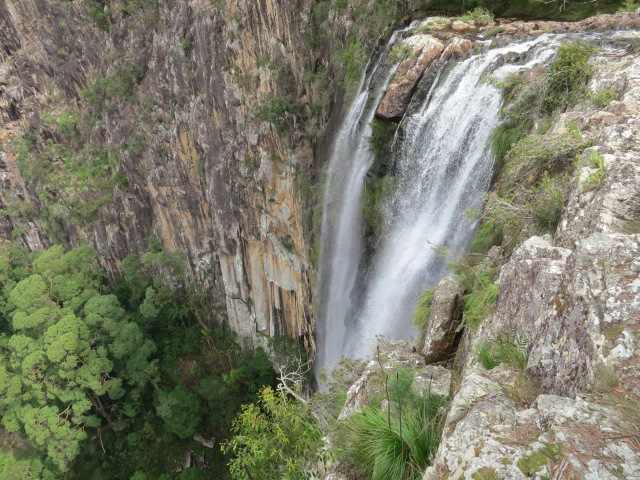 A thirty-minute drive from Byron Bay, on a single track road with hairpin turns, is Minyon Falls, a scenic waterfall with a multitude of hiking trails around it. 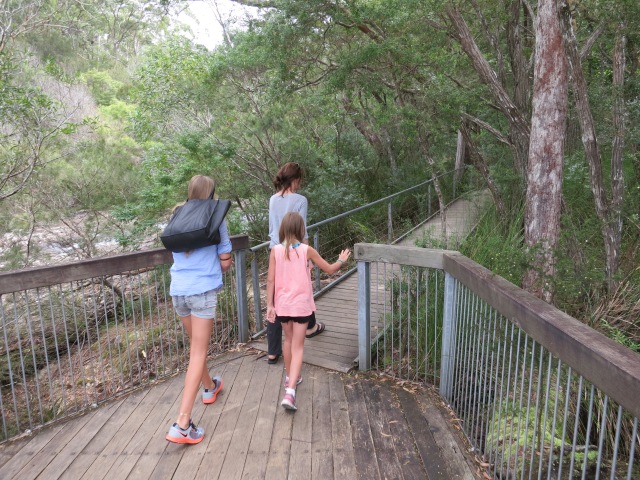 We left the observation deck (viewing the falls from the top) and began our hike along the lower falls trail. Ally instinctively started carrying our picnic bag like Papuan women carry their nokens (traditional bags). 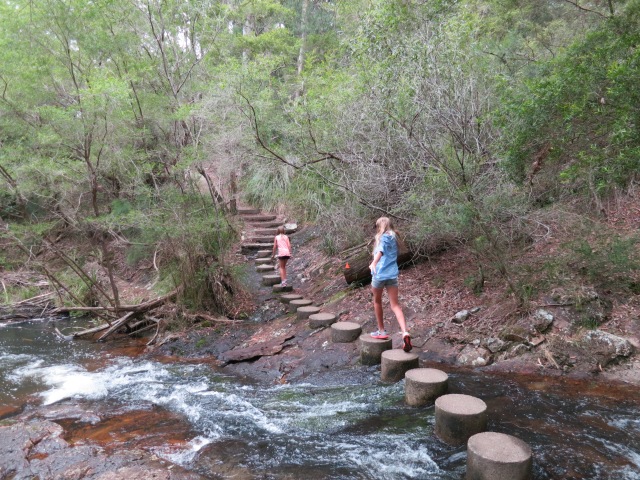 The girls crossing a river. 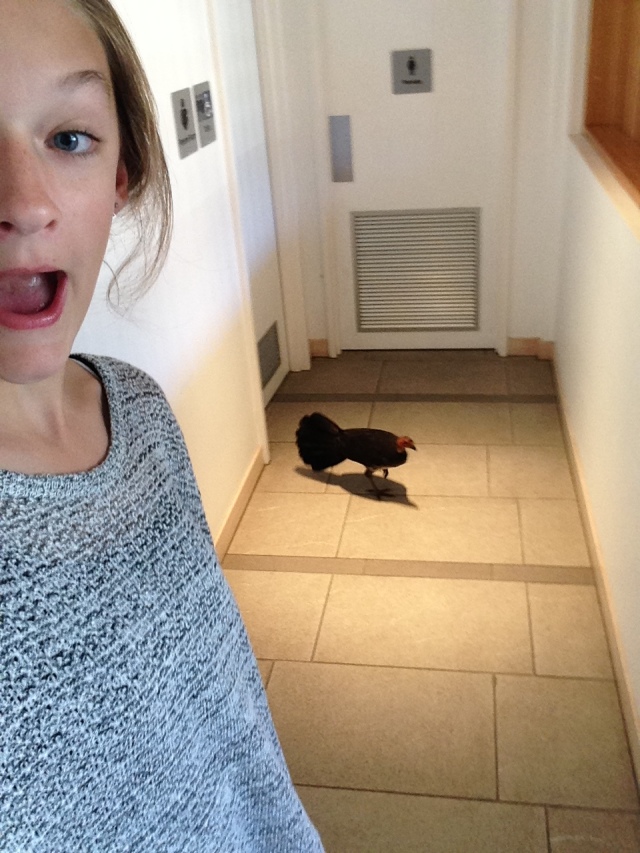 Yet another one of Ally’s wildlife selfies. This time, it was with a bush turkey. They are found everywhere along Australia’s east coast, digging up groomed and manicured landscaping. This one was on its way to the ladies room when Ally took her photo before she attacked her ankles.

*Ally and Kylee rented surfboards in Noosa Heads the day before we left. Unfortunately, Ally’s surfboard flipped out of the water and hit Chris in the face. He received a gnarly laceration on the bridge of his nose and two black eyes. Immediately after muttering an expletive, he kept a pretty good sense of humor about it.