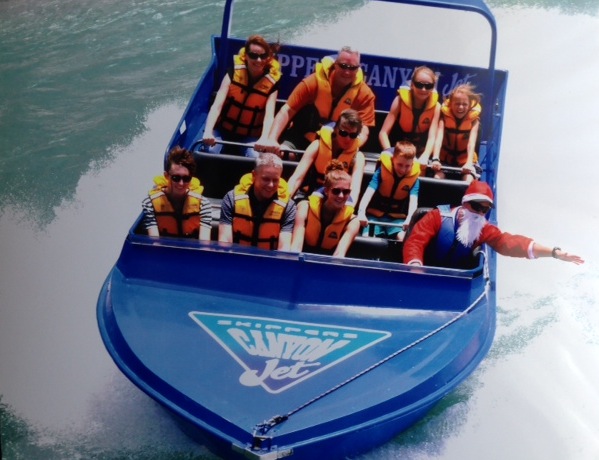 The spirit of Christmas is abounding in Kiwiland, but not with profusely decorated trees vying for attention, with larger-than-life ornaments imbuing magic and excitement, or with strings of colorful lights appearing to never end.  Instead, Christmas is celebrated by subjecting oneself to the most extreme activity that the heart can handle.  White water rafting.  Bungy jumping.  Sky diving.  Canyon speedboating.  Cliff jumping.  The options are endless.  But, one thing is for sure, Queenstown at Christmastime is not for the faint of heart.

We celebrated Christmas, the Kiwi way, by joining Santa Claus on a thirty-minute jet boat ride through Skipper’s Canyon.  Our incredibly skilled driver sped over shallow waters, negotiated narrow canyon walls, and thrilled us with a handful of world famous Hamilton jet spins at speeds of 60km/hour.  Not a bad way to spend Christmas afternoon!

Best Vacation:
Our favorite vacation, by far, was to Ho Chi Minh City, Vietnam. Everything about it, from the food to its history, was uniquely unforgettable.

Most Memorable Toilet:
We have experienced some pretty unusual and unsightly toilets during our travels, but the most memorable one was in Phuket, Thailand.  It was a crude bucket-style toilet that employed two workers, a cashier (who collected 30 baht/person/use) and an attendant (who routinely emptied the buckets).  Toilet paper wasn’t even an option.

Favorite Form of Transportation:
The Mi-171, hands down!

Craziest Letdown:
Kylee was invited to join the school’s gold swimming team in October.  She was looking forward to participating in her first regional meet in Jakarta last month, but the school quickly pulled out of the competition after hearing reports of terror threats against international schools within the country’s capital.

Favorite Family Quote:
“Normal, Pak.”  Everything about Indonesia is out of the ordinary, making it, surprisingly, ordinary.

Most Shocking Moment:
Kylee ordered a pina colada at a restaurant in Bali, as she has done several times before.  When the beverage arrived, she tasted it and gave it to Ally because she didn’t like it.  A few minutes later, after Ally consumed the entire beverage, she started acting strangely liberated and giddy.  Chris flagged down the server and asked him if the drink had alcohol in it.  He responded by saying that it did.  Chris pointed at Kylee and said, “She’s only nine.”  The waiter shrugged his shoulders and said, “Well, I don’t know how you do it in your country.”

Most Expensive Purchase at the Hero:
We paid the equivalent of $25.00USD for three grapefruit.

Newest Family Pet:
Walter, a 4 foot Komodo dragon, who quietly (and inconspicuously) lounges between the two couches in the living room, joined our family after our first trip to Bali in April.

Most Important Lesson Learned:
Never rent a car from a local, unbranded rental company.  Our rental car in New Zealand, an old, beat-up Mitsubishi Pajero, was given to us with NO gas.  The attendant told us that it was empty, so we could return it on empty.  Little did we know that the needle was, literally, sitting below the empty line (we were lucky to make it to a gas station 5 km away).  On top of that, we had to return it two days later, due to an oil leak, and then pick it up the next day.

Biggest Accomplishment:
We have already visited the top seven destinations that we set out to see – Vietnam, Australia, Bali, Beijing, Thailand, Singapore, and New Zealand.  As the new year approaches, it’s time to create a new list.  Where in the world should the Roses go?

Wishing you and your family the merriest of Christmases and the happiest of New Years!