Deep in the interior of the Irian Jaya mountain range sits a remote village that is only accessible by foot and plane. A maze of rugged jungle trails allows villagers to trek from one village to another village, which often requires arduous, multiple day journeys. Getting anywhere else requires travel by bush plane. Pogapa is as remote as it gets without falling off the map.

Recently, two friends and I boarded MAF  (Missionary Aviation Fellowship) at the Timika Airport and headed to Pogapa for the weekend. MAF is a nonprofit organization dedicated to providing aid, relief, and mission projects to some of the world’s most isolated people. The organization uses Cessna caravan airplanes to transport food, medical supplies, building materials and other necessary supplies and equipment to remote villages. For a small fee of Rp750,000/flight (about US$68.00), the pilot will transport adventurous travelers from Timika to Pogapa, and then back to Timika.

Accompanied by boxes and bags chock-full of frozen chicken, bread, beans, flour, clothes, books, and toys for the village, we flew above the great and vast land of Papua. Rolling forest floors and meandering riverbeds continued beyond what our eyes could see. The most spectacular sight was flying within touching distance of an imposing sheer cliff. The same cliff where the crashed remains of a World War II U.S. military plane can be spotted by the discerning eye in the “Shangri-La” valley below.

After passing the cliff, the pilot turned the small plane into a wide-open valley, circled the village below, and then steered it toward nothing more than an elongated grassy patch. If that wasn’t nerve-racking enough, the landing strip was built with a drop-off at one end and a mountain slope at the other end. The landing took my breath away!

Our plane flying over Pogapa Village. The long, bare line running down the middle of the village is the landing strip.

Once we were on the ground, the men, women and children of Pogapa, and their long-time friend and advocate, John Cutts, warmly greeted us. Even a few visiting members of a distant tribe watched us fly in, but they chose to keep their distance and remained on the hill at the end of the landing strip.

A group of villagers who came out to welcome us to Pogapa.

This group of men, from a neighboring village, crouched down on the top of the hill and watched us arrive. Dressed in tribal paint and headdresses, and carrying spears, I was hoping to get a better picture of them, but they jumped up and ran off when I started walking toward them. My friend, Narelle, took this picture just moments before they left.

Men, women, and children picked up our luggage, and the bags and boxes of goods that we brought with us, and carried them to John’s house where we stayed.

Narelle, Myriam and I thanked the people who carried our luggage by giving them bags of dry noodles (similar to “Itchiban” noodles that are available in the U.S.).

Our adventurous weekend in Moni land was filled with explorative walks around the village. The center of the village consists of the community church, a row of shops, traditional huts, wood plank houses, and vegetable gardens. Heavily used paths, leading in and out of the village, led us to the children’s school, a clinic, more huts and houses, more vegetable gardens, an incredible lookout point, and one of two recently crashed aircraft. 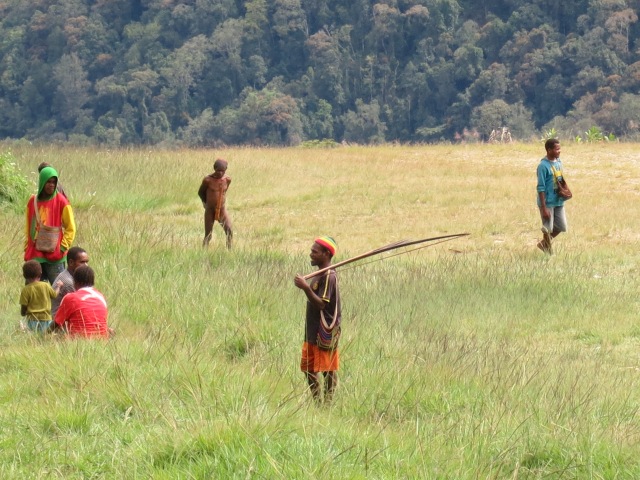 A few villagers engaging in daily activities. During this trip, I learned that men carry bows and arrows, not for hunting, but for the sole purpose of being prepared for conflicts, battles, and tribal wars that can erupt at any given moment.

A Moni man dressed in a koteka (a penis gourd). The length of the koteka indicates a man’s rank and influence. This man is viewed as a “Big Banana” in the village. He was excited about having his photo taken, and happily posed for several photos before continuing his walk up the landing strip. 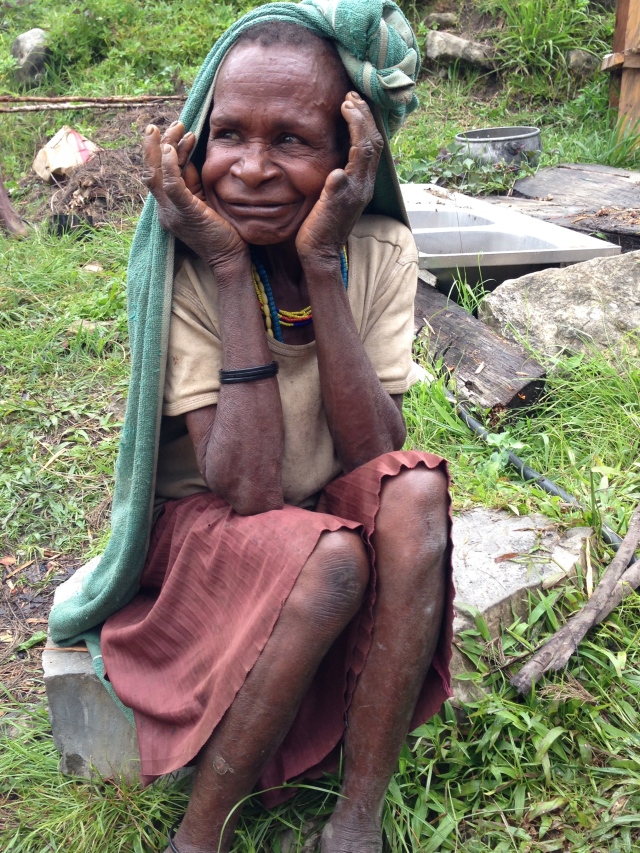 A Moni woman cupping her head with her time-worn hands. The top of her right pinkie finger is missing because she removed it during a mourning ritual after losing a loved one. When preforming the ritual, a finger is tightly bound with string and then amputated at the knuckle by a hatchet-like tool. The finger is then buried whole, or dried and burned. The ritual symbolizes the pain and suffering of losing a loved one.

Two Moni boys peeking through a fence. The orange colored hair, on the boy standing to the left, indicates a protein deficiency. The people living in Pogapa have limited sources of protein because they are a tribe of gardeners and gatherers. With John’s help, rabbit breeding was recently introduced to the village to give them a healthy, sustainable source of protein. 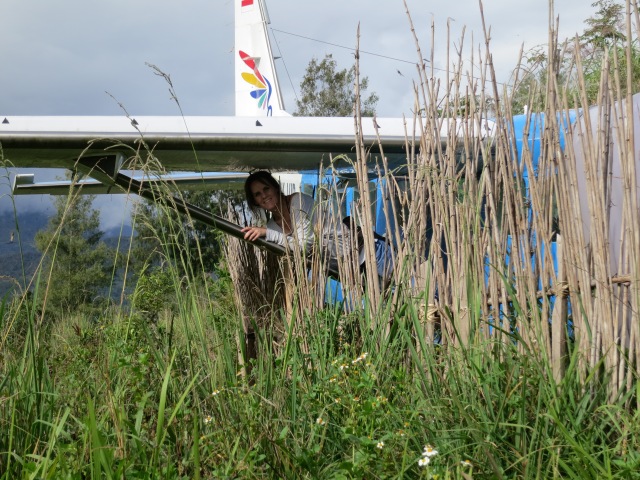 This aircraft (not owned or operated by MAF) crashed upon landing. The pilot had very little experience landing on the difficult landing strip and wasn’t prepared to make his first solo trip into the village. The pilot and his passenger survived the crash, but the aircraft received substantial damage. The other aircraft (which crashed under similar circumstances) was removed from the village last month.

Martha and her prolific garden!

We were graciously invited to attend a kindergarten graduation on Saturday morning and church services on Sunday morning. After Sunday’s church service, we assembled at the church leader’s house to participate in a traditional saigia. A saigia is a feast where food is placed in a shallow pit lined with banana leaves and cooked to perfection with red, hot rocks. Our feast included chicken, a mixture of native greens, and garden-fresh squash.

The village church. It also serves as a community hall where other activities, including school graduation, take place.

Women and children socializing after church.

The saigia began with a raging, hot bonfire to heat the rocks that were used to cook the food. John’s house (where we stayed) can be seen in the background.

While the rocks were heating, Myriam, Narelle and I helped the women line the pit with banana leaves.

When the rocks were thoroughly heated, a group of men and women used split sticks to move them to the cooking pit.

I even tested my skills of manipulating a split stick to pick up and move a few rocks. 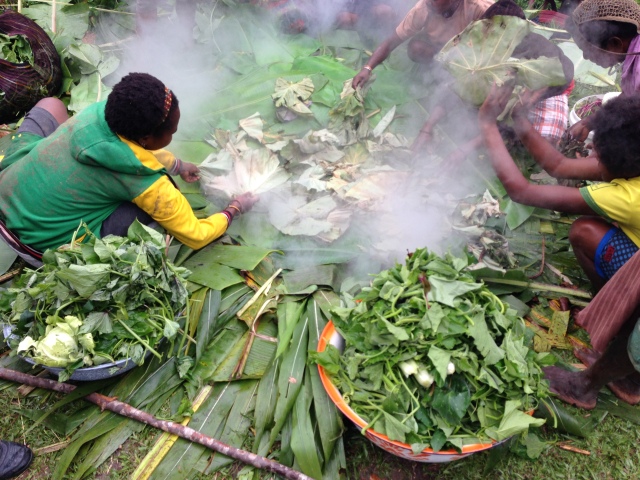 Another layer of banana leaves was placed over the hot rocks. After the rocks were covered, the women threw a heaping mixture of edible greens over the leaves.

Whole chickens and quartered squash were placed on top of the greens.

A final layer of banana leaves and hot rocks were placed in the pit before the vegetables and the meat were left to cook for several hours.

John Cutts is a second-generation missionary in Papua’s highlands. In 1942, his parents, Bill and Gracie Cutts, were one of the first white people to arrive in the interior of Irian Jaya as missionaries for The Christian and Missionary Alliance. John was raised with the Moni people from infancy, and continued the family’s legacy by raising his own children on the mountain. In addition to carrying on the ministry, John serves as their friend, teacher, brother, and advocate. He and his wife created a non-profit organization, Village Heartbeat, to help meet the social, educational, health and religious needs of the Moni people.

When we weren’t immersing ourselves in the day-to-day activities of the native culture, we were buying produce (avocados, heirloom tomatoes, numerous varieties of lettuce, cucumbers, radishes, and sweet potatoes) from local gardeners at John’s front door, while enjoying Myriam’s constant flow of hot Columbian coffee on the veranda at his backdoor. The mass collection of vegetables that we purchased were packed in boxes and taken back to jobsite. It was a special treat to make garden-fresh guacamole for Chris and the girls when I returned!

A Moni woman setting out cucumbers for us to look at and buy.

Another Moni woman setting out freshly picked heirloom tomatoes for us to look at and buy.

The incredible view from John’s veranda.

We woke up early Monday morning to watch the sunrise and to pack our bags for our return flight home. The weather is always unpredictable in the mountains, so it was comforting to hear the Cessna’s single-engine turboprop dutifully spinning in the distance; and then, moments later, to see it clear the mounting clouds. We watched the small plane precariously fly toward the landing strip and then expertly set its wheels on the rough terrain. A perfect landing. 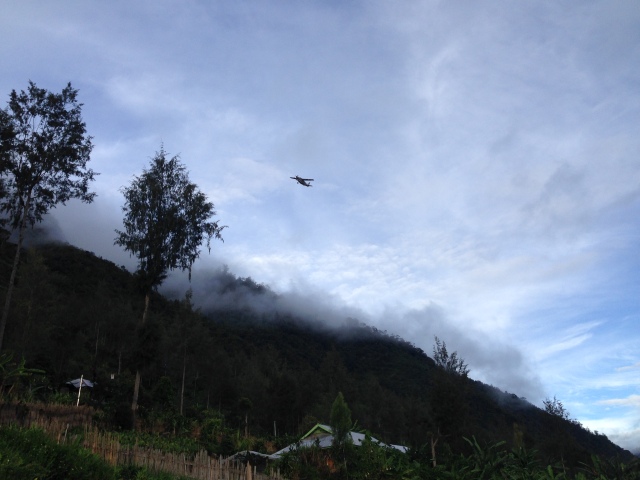 Our pilot, Dennis, returning to pick us up.

The aircraft arriving at the end of the landing strip.

Making sure our backpacks were onboard before saying our final goodbyes to John and his Moni family.