In the Jungle, the Mighty Jungle

The forest near our house is periodically inhabited by elusive Papuans who are heard, but not seen. The sound of their powerful voices, hooting and hollering within the dense tropical vegetation, has a staccato-like rhythm that punctures the air. Sometimes, their voices are shroud in thick, white smoke that slowly rises above the forest floor, or muffled by the sound of heavy metal hitting raw wood. It’s a unique part of living in the jungle – their jungle.

Until now, their jungle activities were limited to the sounds that I heard and the pictures that traveled through my imagination. Last week, a group of Papuan men gathered on the fringe of the rainforest (less than 50-feet from our house) and worked out in the open. They spent two full days cutting wood and stacking their newly acquired timber inside a rolloff container.

This picture was taken on the first day.  The men spent an entire day cutting felled trees into smaller, more manageable sections.  The security guard explained to me that they were taking the wood to Banti Village for new construction.

The men took a short break to cook ayam (chicken) over a fire. After a short lunch break, they went right back to work. The Papuans are, generally, hard working people with strong work ethics. 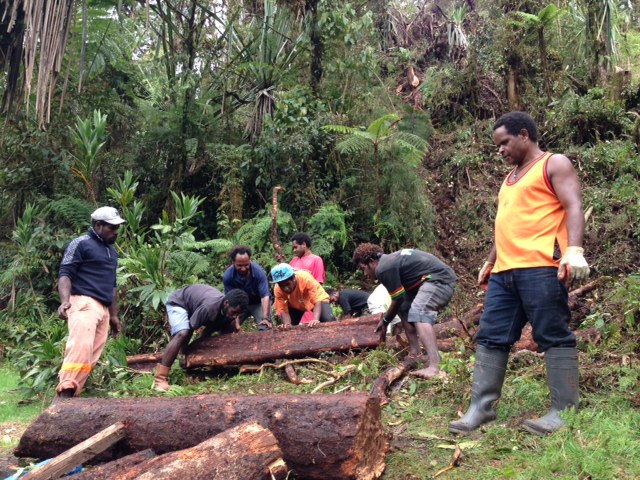 The men rolled the large, heavy pieces of timber down the hill to move them closer to the container.  Some of the men wore steel-toed boots, and some of them worked barefoot. 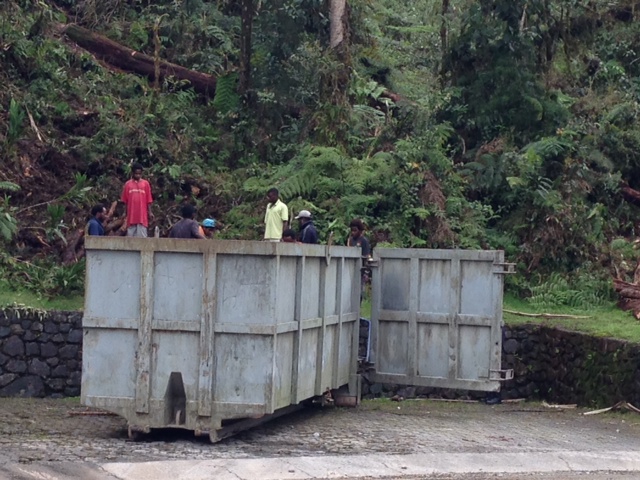 It took a group of six men to pick up and carry a piece of timber into the container.  The company provided the container, truck, and a driver to transport the timber to the village.

This man was excited when I walked over to them with my camera.  He, immediately, called out “Photo, photo, photo!” and posed for this picture.  It is possible that the word “photo”  is the only English word that he knows.

2 Responses to In the Jungle, the Mighty Jungle