People who visit Queenstown, New Zealand for the first time experience a strong and unrelenting gravitational pull to return. The insatiable desire of, once again, laying eyes on its resplendent sights and breathing its intoxicatingly sweet air is deep and intense. Only after a second visit will their souls begin to feel satisfied.

Within days of returning from our first trip to Queenstown, we knew that we needed to return. Replaying the events of our first vacation wasn’t enough. We wanted more. We wanted to continue immersing ourselves in its perpetual beauty. We wanted another day of riding quad bikes and trailblazing through Queenstown’s foothills. We wanted to experience the excitement of a jet boat ride through the Shotover River a second time. We wanted one more bite of a Fergburger. We wanted to explore more of the island. And, the girls wanted to visit their duck friends, one more time. 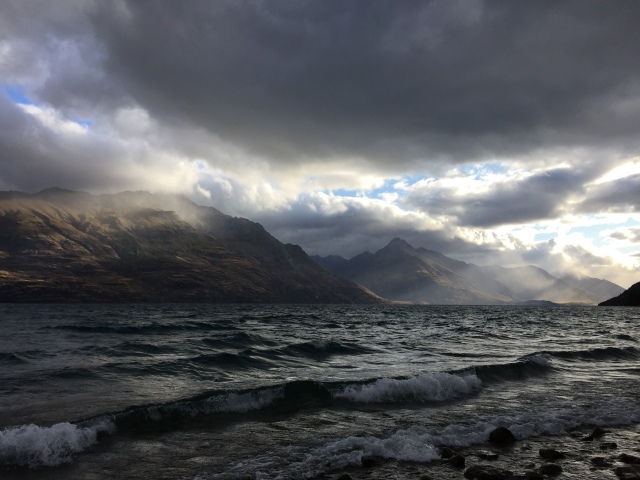 Our welcoming view of Lake Wakipitu when we arrived in Queenstown. It was absolutely breathtaking, and nothing short of what we expected to see!

A view of Queenstown from the top of the Skyline complex. 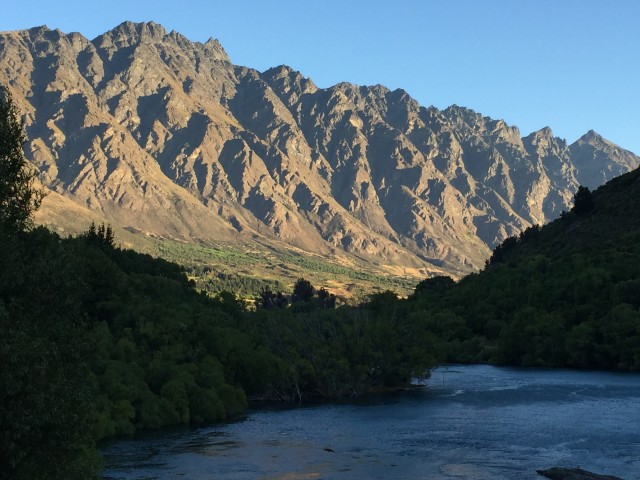 Queenstown’s most majestic mountains, The Remarkables.

The sun shining through clouds above Queenstown’s countryside. 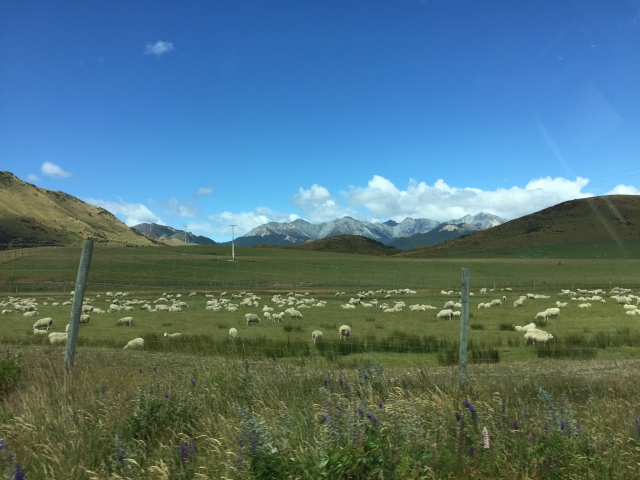 A sleepy sheep station near Queenstown. 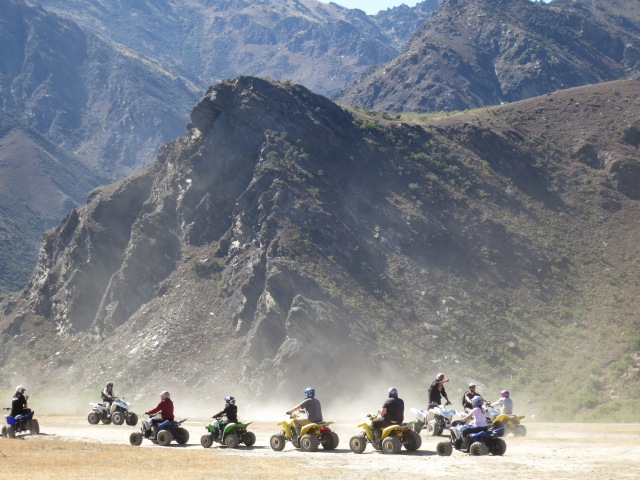 The group of quad bikers driving around the trial track. Ally is third from the left (in the burgendy sweatshirt), directly followed by Kylee and Chris.

A quick break for a photo.

Kylee leading Ally and Chris through a deep creek.

A jet-boat spinning toward the dock for another drop-off/pick-up. 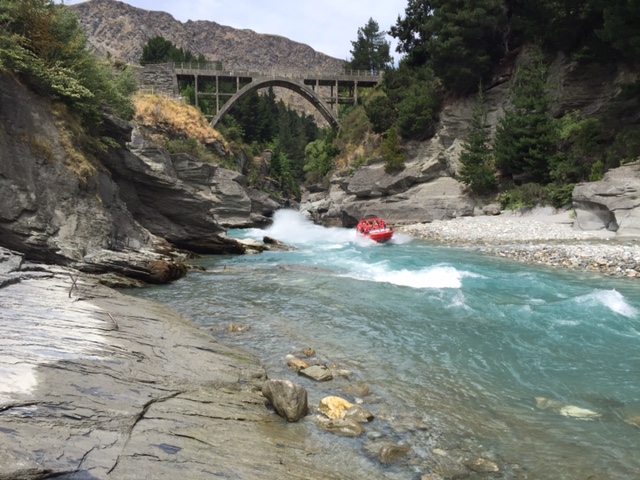 A jet-boat, speeding 85kph over 10cm deep water through tight canyon walls, past rocky outcroppings, and around crags and boulders. 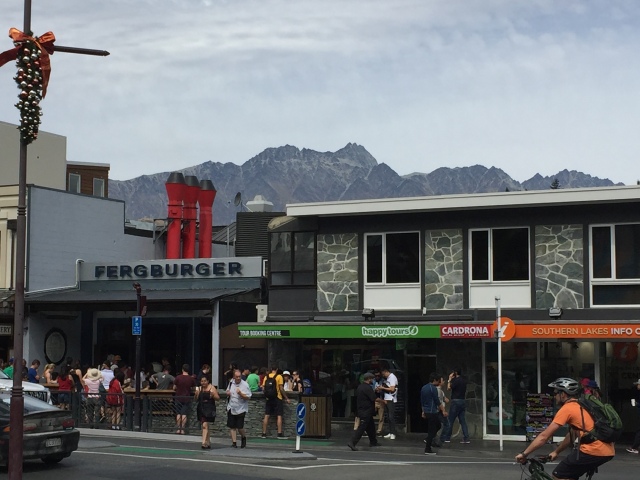 Fergburger with The Remarkables (AKA the Misty Mountains for Lord of the Rings fans) commandingly standing behind it. 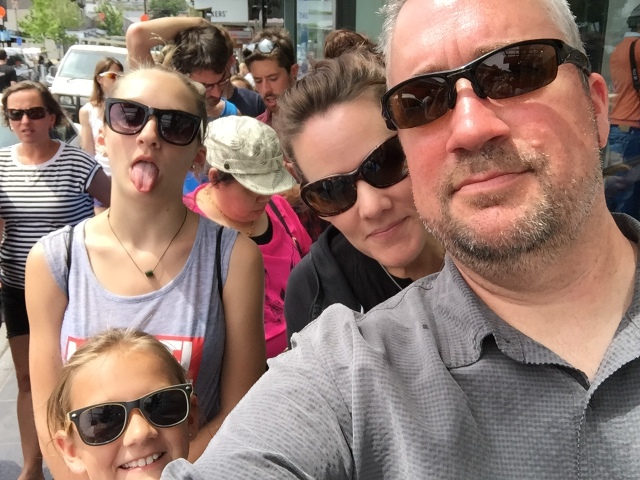 We took a wefie while standing in line at Fergburger because…there’s nothing else to do!  We waited 30 minutes in line just to place our order, and then waited another 30 minutes to receive our order – and that was at 3:00 in the afternoon. But, it was worth every second, even for Ally who, as you can see, was less than thrilled about enduring the long wait!

The girls and I walking along the tree-lined beach. 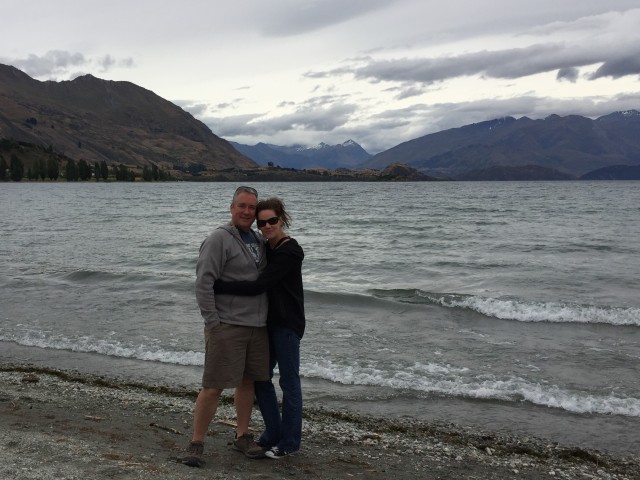 Chris and me at Lake Wanaka.

Chris and Ally taking a photo of themselves on a peak between Queenstown and Wanaka.

Lake Te Anau, New Zealand’s second largest lake. We took a ferry across this lake, through Fjordland National Park, to reach our destination, Te Anau Caves. This photo was taken when we arrived at the western shore.

Te Anau Caves are part of a 6.7km labyrinth known as the Aurora Caves. The ceiling and upper walls are filled with larva (more commonly known as “glowworms”). After a short walk through the cave, we boarded a small wooden boat that took us into a large cavern filled with glowworms. Photography is not permitted in the caves, so I found a photo online (courtesy of thetimetravelersclub.com). This is an enhanced photo with light in the background. When tourists are taken through the cave, it is pitch-black. Glowworms pepper the ceiling and walls like stars in the night sky.

Glowworms use their light to attract prey and then “fishing lines” to capture them. The fishing lines are made of thick, sticky droplets of mucus embedded with chemicals that paralyze small insects after becoming  trapped. Once the insects have been caught, the glowworms reel them up, kill them, and suck their juices out. Photo courtesy of southern-edge.com. 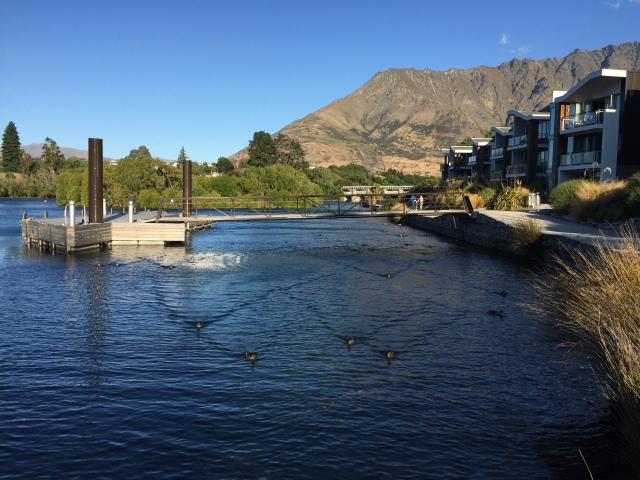 The hotel we stayed at has a large team of ducks that raced toward the girls when they saw them coming because they knew that they had a big bag of fresh bread in their hands.

The ducks chasing the girls down.

This year, a large black swan was new to the scene. By the second day, the girls had managed to gain his trust enough to feed him from hand.

One of Ally’s best wildlife selfies! She captured a picture of her and the swan, while he was straining his neck to catch a piece of bread that she tossed up in the air.

Before flying to New Zealand, we spent a week in Australia’s Tablelands, a fertile plateau above Cairns. We stayed at an isolated resort near Karanda with a natural stream for swimming and kayaking. During the day, we took countryside drives through dairy farms, coffee plantations, and wineries that led us to protected national parks with magnificent waterfalls and idyllic lakes.

Ally and Kylee sitting on a hammock while watching the resort’s resident peacock preen himself. 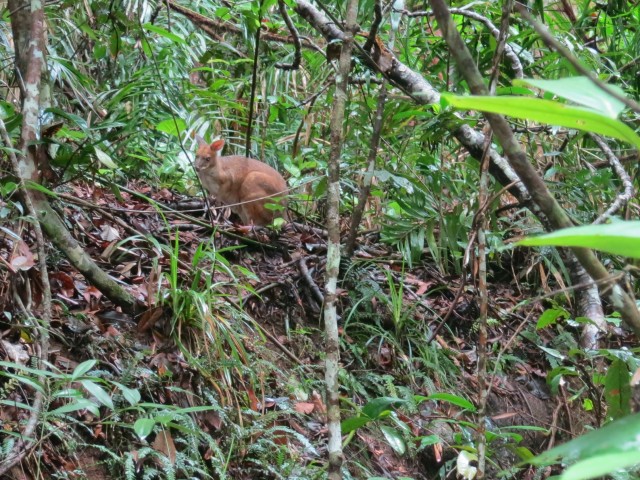 One of many wallabies that visit the resort.

Kylee having a chat with one of the birds. 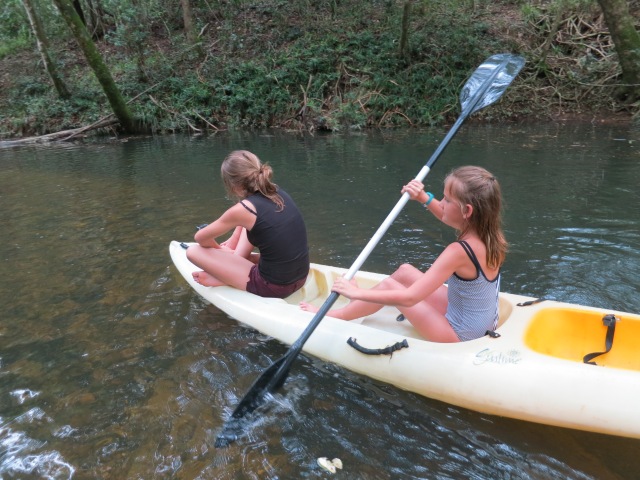 The river behind the resort kept the girls entertained. 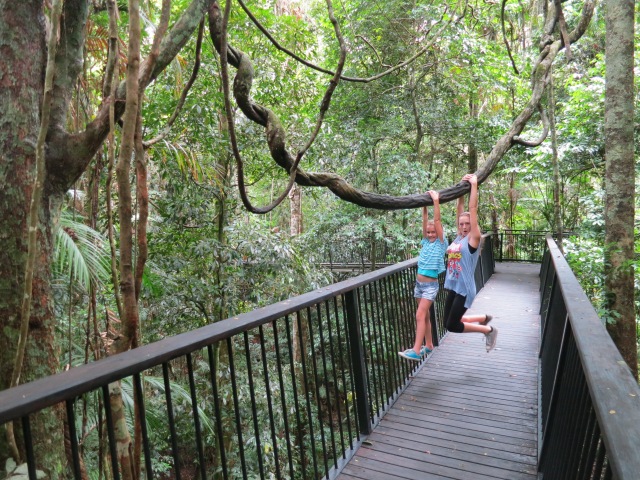 The girls hanging from a vine on the boardwalk to Barren Falls. 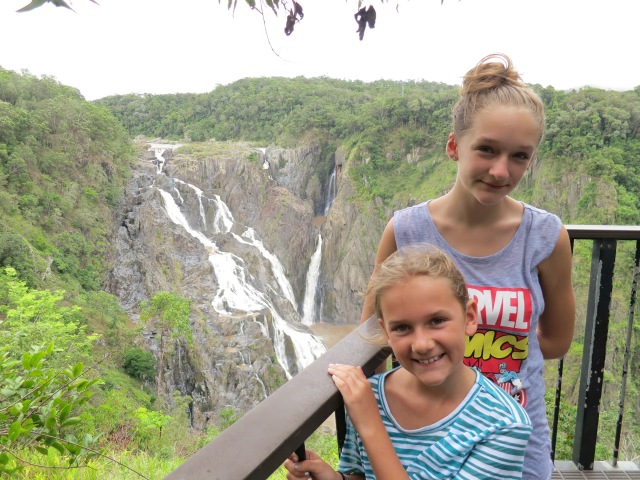 Ally and Kylee with Barren Falls behind them. 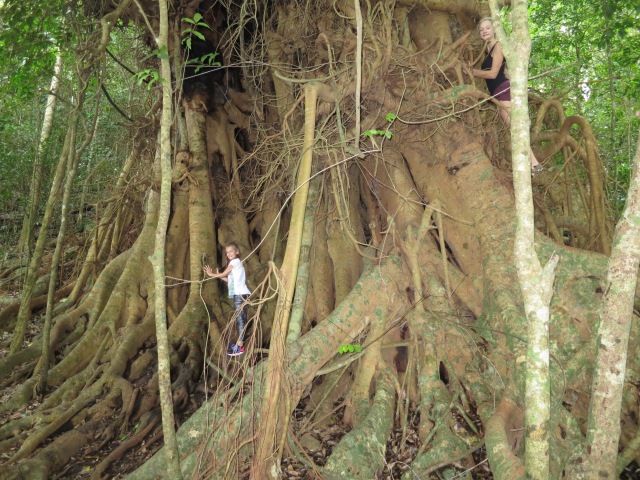 The girls found the best climbing tree EVER at Crater Lake. Don’t miss Ally – she’s standing near the top of the picture (toward the right corner).

The girls standing near a giant termite mound. They are common and permanent structures throughout the Tablelands.

6 Responses to Queenstown, One More Time